Located on the Town Common, facing North Road, the monument was originally conceived by the Honor Roll

Committee for the tercentenary celebration.  Articles 32 and 33 of the Warrant for the Annual Town Meeting of 1954 provided the impetus for the installation of the monument.  Article 32 suggested that the Town consider moving the "Veterans Honor Roll" situated on the lawn of the Town Hall to the Common adjacent to North Road.

Article 33 suggested that the Town appropriate funds to defray the expenses of removing and relettering the Honor Roll.  George Dixon, Robert Hood, and Thomas E. Firth , Jr., members of the Honor Roll Committee, eventually concluded that the old honor roll be demolished and a new permanent stone monument be purchased from the Bavretto Monument Company.   This monument would be dedicated to "all living and dead veterans from the Town of Chelmsford in all wars" as they stated in the 1954 Annual Report of the Town of Chelmsford. None of the names from the Veterans Honor Roll were inscribed on the new monument.

The monument was dedicated on Memorial Day 1955 by members of all the American Legion posts in Chelmsford.

Sitting on a base of granite, the monument is made of light gray marble with a center shaft and two side sections.  The center shaft, approximately 6 ½ feet tall, includes an inscription and an eagle seal; the side sections, while not inscribed, are each decorated with a seal.

The center column is inscribed with these words:

The Veterans Of The 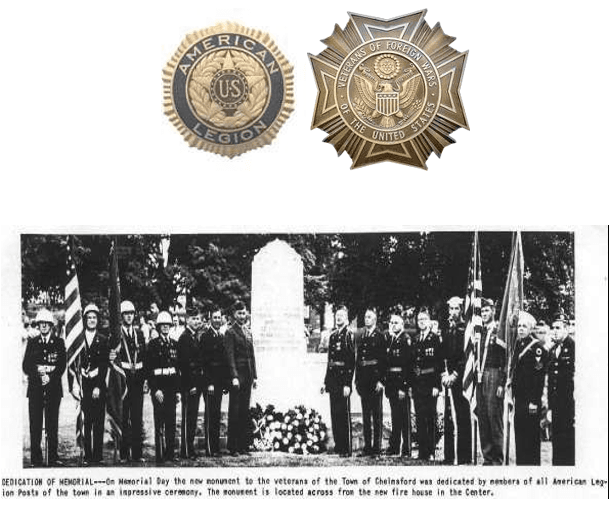